I titled this image, “Uncertainty Avoidance.” I took this image of a star magnolia blooming the other day. It was windy and I wanted to capture it moving in the wind. It is difficult to control and image with long shutter speeds and wind. I thought this was a great metaphor for the times we are facing. I hope you enjoy the image and I hope everyone is back to work as soon as possible. This can be a difficult time for independent businesses. Wishing you all the best John Whitehead Images.

I am giving away 25 Adobe Photoshop Actions to anyone who wants them. 13 of the actions are Matte Effect Gradients with the option of adding a soft blur. The other actions are a variety of actions I have demonstrated in my YouTube Videos. You will be transferred to my John Whitehead Images Tutorial Website. All you need to do to get these actions are to subscribe to my YouTube Channel and sign-up for my newsletter. The goal of this newsletter is alert you when new actions are available, so you won’t be receiving emails everyday. You might get an email once or twice a year.

If you would like to to see examples of the gradients, I have created a page showing the before and after effects. Note: actions are great but you need to be able to change opacities and apply masks for the best effect. That page also has links for my newsletter and YouTube page. I hope you enjoy the actions. 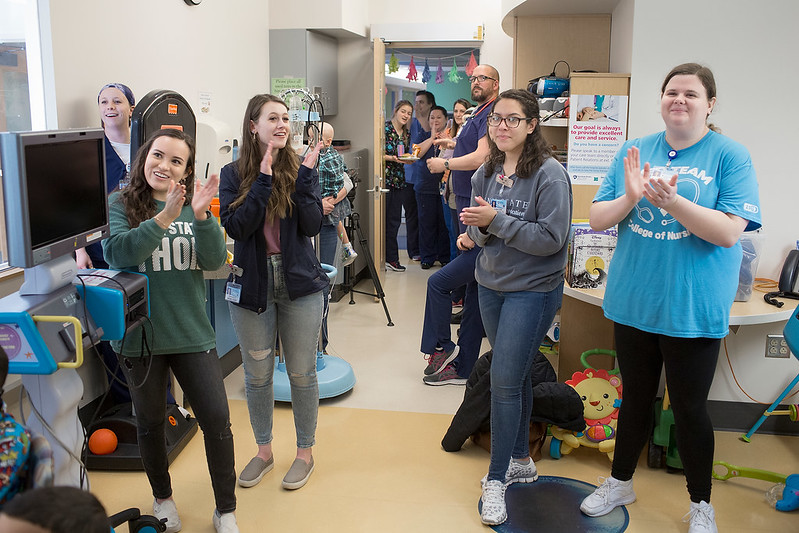 Well you didn’t have to go all the way to Penn State’s main campus to participate in THON 2020. I food fortune to visit and photograph some amazing young children today at Penn State Children’s Hospital. They celebrated the THON Watch Party today. Click on this link to see the real hero’s from today’s event. https://flic.kr/s/aHsmLzTqvh Thanks to everyone who participated in todays and future events for this wonderful cause. John Whitehead You can also see this story on Penn State Health’s Facebook page.

Photography isn’t all about just using a camera. Sometimes when working with clients the day just does not turn out that spectacular. Lighting can be a key element in location or environmental photography. Weather is always unpredictable, especially when you book day or months in advance.

Post processing or editing an image can be key in bringing a so-so image to life. Every client has an idea in their head of what they what. I love to examples before shoots because it give me an idea of their style.

I teach photography and Adobe Photoshop. I created a series of videos for my students to follow as a secondary method of learning. In the video below I walk you though the process of creating this image. Some will like the before and others will like the after. The goal is always to have the ability to create exactly what the client is looking for. I have a whole section in the INFO menu on tips to improve your portrait. Feel free to contact me with any questions.

In the image below I softened the skin. Sometimes when you shoot in this style the shadow areas need to be opened up a lot and can start to show grain. I increased the yellow, red and magenta colors, added a faded background blur, a red to yellow warm gradient and enhanced the lens flare.

Most people are just looking for traditional photography but every once in a while I have someone looking for something different. I am a Photoshop expert. I can blend, retouch, alter or composite just about anything. Photoshop has many tools that do just about the same thing. Some tools work better for what you are trying to achieve. Here, I reduced the flow on my brush to blend these too like images together.

These two images were shot with the intention of combining the images. You would be surprised but with photoshop it is not always so easy to blend images. It really depends on the photographer understanding how Photoshop works that makes blending easy. In this case the two images were perfectly aligned, so the backgrounds matched perfectly. This makes the blending easy and seamless. This is is comprised of 2 mail layers and two texture overlays. To finish the image I added a vignette and border. Feel free to watch this video on how combined these to photographs.

If you are an individual or business looking for blended or composite images give me a call and we can discuss your idea.

Trick to add HTML to Gmail

I have some HTML that I wanted to add to emails but I didn’t want to use MailChimp or another service. It took some looking but I finally figured out how to add HTML to Gmail. Don’t feel bad if you tried and couldn’t get this to work. The process is actually easy, but it isn’t something the average Joe would figure out. I decided to make a YouTube video tutorial which is posted below the the process.

I use these dynamic looking emails to solicit potential new and existing clients. They look amazing and are easy to attach once you have the code. However if you have a large email list a mail service might be a better option. Hope you enjoy the video and learn something new.

There are basically two different types of hard drives on the market. One is a spindle hard drive and the others is an SSD or solid state drive. The spindle drive has been around for a long time. These drives are found in 2.5 inch and 3.5 inch drives. 3.5 inch drives usually need auxiliary power. 2.5 inch drives usually run on bus power(gets power though data connection). These drives are electro-mechanical data storage devices. The platters rotate between 5400-7900 rpm and a magnetic arm moves across the platter to read and write data. The read/write speeds of these drives are around 115-250 MB per second. An issue with a spindle drive are the read/writing speeds are slow and can easily break because they have moving parts. Their pros are they hold large amounts of data and are the most cost effective.

The 2.5 inch drive is usually a portable drive that runs at 5400 rpm on bus power. They are most common in laptops, but most new computers use solid state drives and portable external hard drives. It is one of the more common drives found in box stores and it is most likely a consumer drive. The 3.5 inch drives runs at 5900-7900 rpm. Usually, the faster the rotation the faster the read/write speeds. They offer the most bang for the buck but usually require separate power. These drives are usually found as a desktop internal drives, NAS drives or external non-portable drives. Spindle drives come in consumer and enterprise variants.

Enterprise drives are usually made for NAS(network attached storage) or servers and are much more reliable, rated for around 1 million hours and have better warranties. The main spindle drive brands are Western Digital and Seagate. Toshiba is also in the market. Hitachi or HGST used to make spindle drives but Western Digital bought the company. Examples of Enterprise drives are Western Digital Red Pro and Seagate IronWolf Pro. You can get enterprise hard drives in external drives. I use one by Glyph, Glyph does not make drives. Most likely it uses Western Digital or Seagate. I usually just call the manufacture and they will tell you the exact specifications.

If you are ever wondering which drives are the best, a company called Backblaze publishes the failure rates of the drives they use. Backblaze is a personal and business backup service. I use and love this company. They backup your computer and all hard drives for $6 a month but you can get a discount if you pay for the year. This is not an offsite cloud like google drive but a backup solution. The process is automated in works in the background.

The SSD is a flash memory drive that has no moving parts and work with semiconductors and NAND style chips. They are lighter and more portable, require less power and crazy fast. SSD’s are found as internal hard drives as well as external drives. Most computers these days are using SSD’s are the main hard drive. The speed of the drives lets you computer boot up and work at much faster speeds. The down side is they are more expensive(but prices are dropping) and they don’t hold as much data. It is typical these days to see smaller SSD’s in a laptop to run your OS and all other data saved on external drives instead of the internal SSD. This is the way I have been working the last 6 or 7 years. I actually made on old 2010 MacBook Pro useable by replacing the spindle drive with an SSD. SSD speeds vary on a variety of factors but read/write speeds are around 450-3000 MB per second. Just like any drive they do have a limited life and will slow down when the reach the number of times they can read/write data.

I presently use an internal SSD in my laptop, an external SSD as my working drive, two external spindle drives one enterprise and one consumer, and four Western Digital NAS Red drives in a Qnap Network Attached Storage running Raid 5.

If you would like to learn about the differences in SD cards check out this blog I wrote https://www.jcwphoto.com/sd-cards-are-not-created-equal/